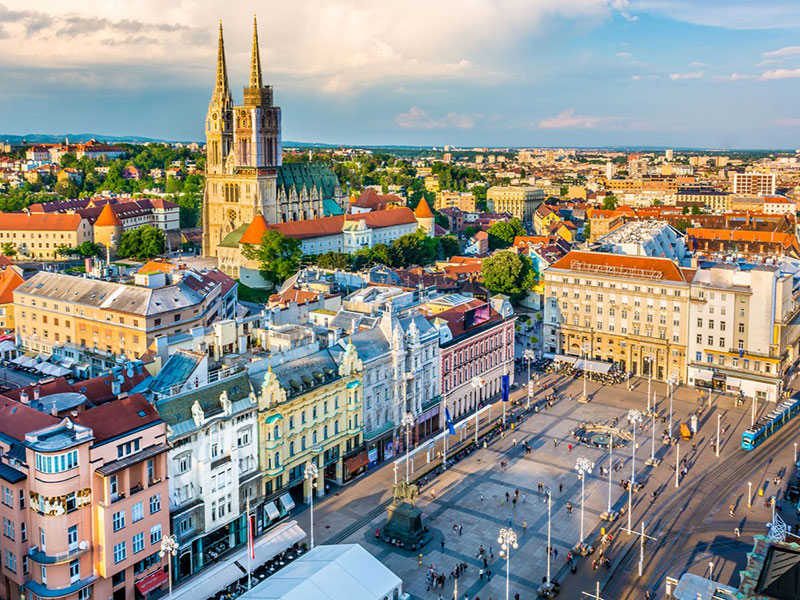 Arrive in Dubrovnik at. Upon arrival, you will be met and transfer to your hotel in Dubrovnik. The balance of the day is free to relax from your long flights. You will enjoy a welcome dinner tonight in you hotel.

Depart for your walking tour of “Old Dubrovnik” today. This medieval walled city is one of the gems of the Adriatic coast. You will see the Synagogue, the Rector’s Palace, Bell Tower Clock, Orlando’s Column and the Sponza Palace. You will also see the Dominican Monastery and Franciscan Monastery with its Pharmacy, one of the oldest in the world. The rest of the day is at leisure to explore and enjoy dinner on your own at one of dubrovnik’s many fine café’s and restaurants.

Following breakfast, you will depart for Split, Croatia’s grand 1,700 year old city and a UNESCO World Heritage site. The ride to Split is via the Dalmatian Coast, considered one of the most scenic rides in the world. You will enjoy a walking tour in Split marveling at its rich culture with Renaissance and Gothic architecture. At the heart of its waterfront is Diocletian’s Palace, the 3rd century “retirement home” of the Roman Emperor. You will admire its lovely peristyle courtyard, Cathedral of St. Domnius, Roman temples, and Synagogue. Many of the palace’s structures were built with the gleaming white marble quarried from the nearby island of Brac. Afterwards you will visit the Jewish Cemetery. The remainder of the day is free to enjoy this seaside town.

Today you will drive to the magnificent Plitvice Lakes National Park, a UNESCO World Heritage site. These 16 terraced lakes descend 300 feet in 4 miles down a wooded hillside via a series of waterfalls. Following free time to explore, you continue to the lovely seaside Opatija, beautifully sheltered between the gulf of Kvarner and Ucka Mountain on the dramatic Istrian Peninsula. Many of the stately homes were fashioned after those on the French Riviera.

After breakfast, depart to Rijeka to visit Rijeka Synagogue and take a stroll on Korzo. Then you continue to Zagreb. You will enjoy many historic city highlights including: Upper Town, St. Mark’s Church, St. Catherine’s Church, the Cathedral, the Parliament, the Government Palace, and the Jewish community.

Today is a free day in Zagreb

Today you continue your journey to North Croatia to Bjelovar for a visit to the Synagogue. It was destroyed during World War II and was turned to a theater after the war. Today Synagogue serves as a cultural Center. Following your visit, you will continue to Osijek.

After breakfast you will tour the city of Osijek. You will visit the Baroque Fortress, St. Trinity Square, and Water Gate You will then visit the Holocaust Memorial and Synagogue in the Lower Town. In the afternoon you will continue to Sarajevo in Bosnia and Herzegovina.

After breakfast, depart for your city tour of Sarajevo, Bosnia’s capital and home of the 1984 Olympic games. Visit the picturesque Turkish Bazaar “Bas Carsija”, Olympic Stadium and Tunnel Museum. The rest of the day is free to explore the cobblestone streets of this charming city. Tonight you will enjoy a Farewell Dinner at a local restaurant

Check-out from hotel and proceed to Mostar. Half way to Mostar, we stop in the beautiful small town of Konjic on the river of Neretva. Short sightseeing of the town. Continue our way to Mostar. Upon arrival Mostar proceed for the city tour with fascinating history, beautiful architecture and natural setting in a valley on Neretva river banks. Start with sightseeing; visit Old bridge (UNESCO World heritage), Bey’s Mosque, Oriental bazar and Turkish house.

Check-out from hotela and drive to Trebinje. It is the southernmost city in Bosnia and Herzegovina situated on the banks of Trebišnjica river in the region of East Herzegovina. After visiting Monastery Tvrdoš from 15th century and city center. Check-in to hotel and free time.